HELP! We're sorry for the interruption, but please don't scroll past this just yet. Most of our website visitors don't support our work because they cannot or they think others will do enough. If Good News Ministries has given you $25 worth of faith-growth during the pandemic, please take a minute to donate $25. Thank you. You'll be helping our staff and volunteers change the world by taking the light of Christ into the darkness. If you are one of Christ's Champions who have recently donated to keep our mission going, we sincerely thank you.

"Remember this: Whoever sows sparingly will also reap sparingly, and whoever sows generously will also reap generously… God loves a cheerful giver. And God is able to make all grace abound to you, so that in all things at all times, having all that you need, you will abound in every good work" (2 Cor 9:6-9).

The future of Good News Ministries is at stake. Monthly donations are down because of the income losses of many supporters. At this rate, we'll only be able to bring you our services for three more months. So we have to trust God to take good care of us. We are all being tested for the sake of our faith growth.

COVID-19 Faith-building Resources:
Receive Jesus in a Spiritual Communion | Pray at Our Lady of Miracles Virtual Shrine
| Marian Consecration
|
Prayers to Saints who Stopped Plagues | Podcasts to strengthen your faith

Hear God’s miraculous and compassionate intervention at work when Merle Pereira lost her job and was unjustly denied money due her. (The transcript is provided below.)

I would like to testify that the Lord is always faithful and answers me whenever I call on Him. I have always experienced Him as a very present help in times of trouble. There are a number of miracles He has worked in my life, but I would like to state just one of them.

In the meantime, I took this matter to the Lord in prayer.

After a few days, I got another job and saw the hand of the Lord, as it was not possible, being a senior citizen and the possibility of a job was very remote. I took up the job, and one evening, as I was waiting for the bus to return home, I was inspired to go and meet the CEO of my previous company. And so I went to meet him with no prior appointment. Since the Lord led me, I was very easily taken in by the secretary of the CEO in spite of his busy schedule, and moreover he was leaving for Indonesia the next day. He agreed to see me. And so I related to him everything.

He was quite upset with the way I was treated and promised to see that all my dues were settled. Within a couple of days, I not only received all my dues but was also given an additional amount by the company at the behest of the CEO.

See also the testimonies of: 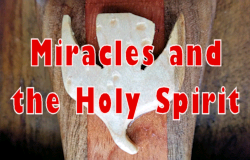