May 18: PRAY THE ROSARY FOR CONVERSIONS
April 24 – June 6: CONSECRATION TO THE HOLY SPIRIT
Any time: Activate your amazing life in the Holy Spirit

Is there reference anywhere in the Bible as to the fact that Mary was kept from sin? 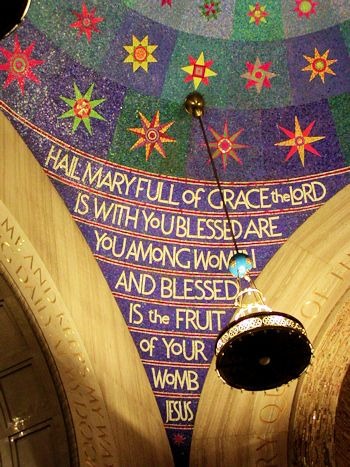 Yes, but it’s the messages of inter-related scriptures that provide proof of this Catholic teaching.

Not everything is spelled out in scripture. For example, nowhere in the Bible does it say that abortion is murder because life begins at conception. Yet, we know from the truths that are written in scripture that God knew us and loved us while we were still in the womb and that all life is sacred. So, too, it is with understanding Mary and her life.

We know what scripture says about grace, and that Mary was full of grace because of what it means to be “highly favored” by God.

We interpret the “woman” in the book of Revelation as Mary, mother of the Church (since she is the mother of Jesus and we the Church are His body, she is therefore the mother of the Church). Revelation says that the evil one had no power over this woman; the only reason why that could be so is that Mary did not sin. Mary is the “new Eve”. She undid what Eve did by saying no to temptation. Mary lived the way Eve was supposed to live. Christ is the new Adam, and Mary is the new Eve; therefore, the power of original sin has been undone and we can all live in Paradise (which for now is only in Heaven until after the second coming of Christ when Satan and his army are finally and completely expelled from Earth).

The Church has understood and taught these things since the beginning of Christianity. However, sometimes it seems like a teaching is new. The dogma of the Immaculate Conception of Mary became an official proclamation by Pope Pius IX in recent history, 1854, because the world’s influence was eroding it and something had to be done to prevent misunderstanding and heresies.

The Catechism is a great resource for getting these types of questions answered. It references scriptures everywhere. Here’s what it says about Mary and whether or not she sinned:

Paragraph 410-411:
After his fall, man was not abandoned by God. On the contrary, God calls him and in a mysterious way heralds the coming victory over evil and his restoration from his fall [Gen. 3:9,15]. This passage in Genesis is called the Protoevangelium (“first gospel”): the first announcement of the Messiah and Redeemer, of a battle between the serpent and the Woman, and of the final victory of a descendant of hers.

The Christian tradition sees in this passage an announcement of the ‘New Adam’ who, because he ‘became obedient unto death, even death on a cross’, makes amends superabundantly for the disobedience, of Adam [cf. 1 Cor. 15:21-22,45; Phil. 2:8; Rom. 5:19-20]. Furthermore many Fathers and Doctors of the Church have seen the woman announced in the ‘Proto-evangelium’ as Mary, the mother of Christ, the ‘new Eve’. Mary benefited first of all and uniquely from Christ’s victory over sin: she was preserved from all stain of original sin and by a special grace of God committed no sin of any kind during her whole earthly life.

Para. 491:
Through the centuries the Church has become ever more aware that Mary, ‘full of grace’ through God,[Lk 1:28 .] was redeemed from the moment of her conception. That is what the dogma of the Immaculate Conception confesses, as Pope Pius IX proclaimed in 1854: The most Blessed Virgin Mary was, from the first moment of her conception, by a singular grace and privilege of almighty God and by virtue of the merits of Jesus Christ, Saviour of the human race, preserved immune from all stain of original sin.

Para. 493-494:
The Fathers of the Eastern tradition call the Mother of God “the All-Holy” (Panagia), and celebrate her as “free from any stain of sin, as though fashioned by the Holy Spirit and formed as a new creature”. By the grace of God Mary remained free of every personal sin her whole life long. “Let it be done to me according to your word. . .”

At the announcement that she would give birth to “the Son of the Most High” without knowing man, by the power of the Holy Spirit, Mary responded with the obedience of faith, certain that “with God nothing will be impossible”: “Behold, I am the handmaid of the Lord; let it be (done) to me according to your word” [Luke 1:28-38; cf. Rom. 1:5]. Thus, giving her consent to God’s word, Mary becomes the mother of Jesus. Espousing the divine will for salvation wholeheartedly, without a single sin to restrain her, she gave herself entirely to the person and to the work of her Son; she did so in order to serve the mystery of redemption with him and dependent on him, by God’s grace:

As St. Irenaeus says, “Being obedient she became the cause of salvation for herself and for the whole human race.” Hence not a few of the early Fathers gladly assert… : “The knot of Eve’s disobedience was untied by Mary’s obedience: what the virgin Eve bound through her disbelief, Mary loosened by her faith.” Comparing her with Eve, they call Mary “the Mother of the living” and frequently claim: “Death through Eve, life through Mary.”

Para. 2853:
Victory over the ‘prince of this world’ [John 14:30] was won once for all at the Hour when Jesus freely gave himself up to death to give us his life. This is the judgment of this world, and the prince of this world is ‘cast out’ [John 12:31; Rev. 12:10]. ‘He pursued the woman’ [Rev. 12:13-16] but had no hold on her: the new Eve, ‘full of grace’ of the Holy Spirit, is preserved from sin and the corruption of death (the Immaculate Conception and the Assumption of the Most Holy Mother of God, Mary, ever virgin). ‘Then the dragon was angry with the woman, and went off to make war on the rest of her offspring’ [Rev. 12:17]. Therefore the Spirit and the Church pray: ‘Come, Lord Jesus,’ [Rev. 22:17,20] since his coming will deliver us from the Evil One.

You can look things up yourself in the online Catechism at:
http://www.vatican.va/archive/ccc_css/archive/catechism/index/m.htm

Please share this with others by using the social sharing icons at the bottom of this page. Or request a printable copy that's licensed for distribution here, unless it is indicated above that it is already available from Catholic Digital Resources.
Printed from: https://wordbytes.org/faqs/was-Mary-sinless/

So I am a catholic struggling with all the dogmas- I have been spending hours reading the bible – and see many things the church teaches – that are not in the bible. So if there are other sources that you believe are –
true teachings that did not make it into the Bible when it was put together as a collection of inspired books.
Where are they and how can anyone have access to them

The Gospel writer John said that all the books in the world could not contain all that there is to know about Jesus. (John 21:25) So in the Catholic Church (which is the Church at the time of the first Christians) we have “Tradition”, which is solid teachings that fill in some of the blanks that scriptures did not cover, all of which are soundly and thoroughly based on scripture. Today, we have the Catechism of the Catholic Church to access; this is a collection of all the teachings, all the dogma, all the doctrines, loaded with scriptures to back them up. Start here: http://www.vatican.va/archive/ccc_css/archive/catechism/index/a.htm