Is Hell Crowded or Empty? 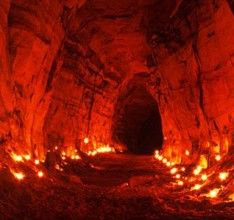 “An internet controversy is percolating around a … book by well-known evangelical preacher Rob Bell. In this text, Love Wins: A Book About Heaven, Hell, and the Fate of Every Person Who Ever Lived, Bell apparently advocates the ‘universalist’ position on salvation, according to which everyone in the end is saved and that Hell, accordingly, is empty.”

So begins a very helpful article by Bishop Robert Barron, the creator and host of a wonderful ten-episode documentary series called “Catholicism” and host of programs on Relevant Radio, EWTN and at WordOnFire.org.

At Good News Ministries, I am often saying that fewer people end up in hell than we might think, because when we meet Jesus face to face at the hour of our death, everything becomes clear. Even someone who has rejected the Christian faith during his life on earth, at the moment of death, when Jesus comes to meet him (or her), he finally sees Jesus as he really is and for the first time truly understands who he is, how much he loves us, and what he has done for us to bring us to salvation.

See what great love the Father has lavished on us, that we should be called children of God! And that is what we are! … Beloved, we are God’s children now; what we will be has not yet been revealed. We do know that when it is revealed we shall be like him, for we shall see him as he is. All who have this hope in him purify themselves, just as he is pure. (1 John 3:1-3)

Anyone who has loved others will recognize Jesus as the one who is the source of that love and to whom our love for others ultimately goes — and thus, being a loving person, he (or she) will want to spend eternity with Jesus. With this new and complete clarity of understanding, he (or she) will regret the sins that he had not purged from his life and will want to choose purgatory as the final purification process so that he can live eternally in the fullness of God’s love.

This is my belief after studying what the Catechism of the Catholic Church says about life after death. But I do not say that everyone will want to spend eternity with Jesus. We simply cannot know what anyone experiences at the moment of their death, not even the most vile, hate-filled person. Did their hatred and evil-doings come entirely from free-will choice or were they perhaps, to some extent, living out the wounds that had been inflicted upon them earlier in life? Only God knows how accountable anyone is for their sins.

I doubt that Rob Bell is right about hell being empty. But I also strongly suspect that it’s a lot less crowded than we imagine it to be. Father Barron explains the Church’s teaching on this very well. Please read his article, Is Hell Crowded or Empty?