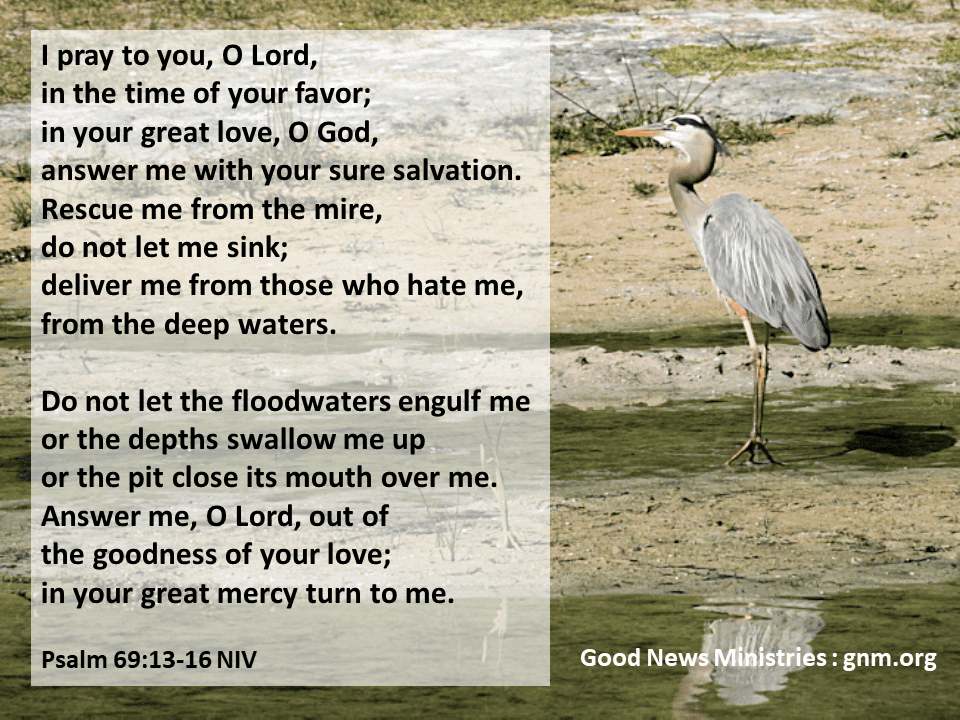 How we learned to overcome our fears: 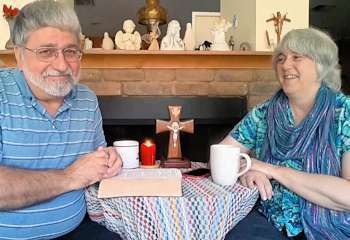 Ralph: God’s ways are not our ways. God’s thoughts are higher than our thoughts. We are here to share with you our journey learning from God about sacrificial giving.

“Do not worry about your life…Look at the birds of the air…
Your heavenly Father feeds them.
Are you not much more valuable than they?”

We began to learn: “Do not be afraid, do not worry about tomorrow; God knows our needs and will take care of us.”

Ralph: For a long time, we worried about our finances, yet all that worrying didn’t improve anything. We didn’t really believe that if we handled things God’s way, he would take care of us. The more we tried running things our way, the worse our financial situation became. We were constantly broke! We heard talks on sacrificial giving and tithing (giving 10% of all income), but we were sure we could NOT afford to give more than a dollar a week.

Then we heard someone say: “If you really want to know whom or what you love and serve, look at your checkbook.” My answer: Of course I want to know! What kind of a question is that?! And when we looked, we realized that we served many strange gods, with strange names, such as Visa, MasterCard, and some military guy named General Motors.

Terry: However, Matthew 6:24 says: “You cannot serve both God and money.” Statistics show where the problem really lies:

We decided to shift our focus off of money TO GOD. That meant deciding to not worry about tomorrow, but to trust God instead. We had an opportunity to test God’s wisdom when we prepared to move from Tampa to N.J. in 1979. Instead of selling one of our cars, worth $200 (which was a LOT of money back then, and we needed every penny of it), we gave it away to a man who needed a car so that he could get a job. We soon sold our house for $2000 more than expected. That’s a 10 to one increase!

Ralph: Scripture says that when we are generous, God returns the generosity 10 or 100-fold. We believe God returned our generosity with the car 10-fold.

I thought we had found a great way to turn $10 into $100! But, this is not a get-rich-quick scheme. God doesn’t work that way. What he wants is for us to realize that he’s in charge, not us. His ways work better than our own ways — we should trust him instead of being afraid and worrying about tomorrow. He is the provider, not me.

The basic principle of giving is this: God owns everything — everything we have he’s given to us, including our talents that helped us get jobs. We’re stewards of God’s gifts. Even if we get laid off, God will take care of us. He’s shown that to me in my own difficult circumstances during a recent major downsizing where I worked. Three times I was on the company’s list of people to be laid off, and three times I was removed from the list.

Terry: We’ve learned that everything we have are gifts God has given us so that we can use them to help others. We are distributors of God’s grace, to help others.

Looking at our checkbook, we saw how little of our money we distributed to the Church and other charities. Because we had been giving more of our time and talents to the Church, we thought that meant we were right with God, but we were hanging on to our money, because we were afraid … afraid that we could NOT afford to give more than a buck or two per week. However, I learned something from St. John of the Cross:

“It makes little difference whether a bird is tied by a thin thread or by a cord. For even if tied by thread, the bird will be prevented from taking off just as surely as if it were tied by cord — that is, it will be impeded from flight as long as it does not break the thread. This is the lot of a man who is attached to something; no matter how much virtue he has, he will not reach the freedom of divine union.”

Ralph and I were attached to our money. We were tied down by our fears that we couldn’t be more generous.

Ralph: How we manage our gifts shows how much we trust God and how much we really believe that he’s the source of all that is good.

God was challenging us to grow in trusting him. But were we willing to prove that we believed God and trusted him? Were we willing to prove that God was more important to us than anything else we wanted to do with our money? We’ve heard we’re not supposed to put God to the test, yet there’s one place in scripture where we’re told to test God. It has to do with money: Giving to God based on what he’s given to us.

In Malachi 3:10, God commands us to “Bring the whole tithe to me. Test me in this, and see if I will not open the floodgates of heaven and pour out so much blessing upon you that you won’t be able to contain it.”

Terry: We decided to try it. We made the commitment to set aside a certain percentage of our income, right off the top. To make it a regular discipline, we gave that amount every week and started using church envelopes. We gave half to the Church and the other half to other charities. We wrote these checks before we paid our bills. Our goal was to give the 10% that God asked for in the Bible, but we still had some fear that we couldn’t afford it, so we started small and increased the amount every few months.

Believing God and trusting him means being willing to make sacrifices, because it shows that our trust is placed more in him than in our own ways of doing things. Because our priorities had been wrong and we needed to grow in trusting God, we had to learn to give until it hurts. When that amount no longer hurt, we gave more.

Ralph: We’ve been giving at least 10% for the past few years [and never stopped]. We’ve learned that God has never abandoned us, never let us go hungry, never let us miss paying any bills, even though we lived from paycheck to paycheck and, until recently, never had enough left over to open a savings account. We’re not rich by worldly standards (nor do we need to be), but we’re now wealthy in many ways that we never were before:

These are all blessings that no amount of money can buy. We also have peace of mind from knowing that God really does care about us and he is the provider for our family, not me.

And by the way, all of our material needs have been met more than was necessary.

Terry: Our kids have learned a lot about trusting God, because of the example we’ve set in putting God first. (For example, our 15-year-old son, David, even puts his own money into the collection.) We need to ask ourselves what our children are learning from the way we give or fail to give.

Ralph: We’d like to leave you with a message of Good News: Your Father God loves each and every one of you very, very much, more than any of us can imagine. Do not be afraid or worry about what you are to eat or drink or wear, because your heavenly Father knows you need all these things. Choose to set your heart on serving God first, and all these other things will be given to you as well. Choose whom it is you serve.

May our Father bless each of you abundantly.

Next, read Nancy’s story: One of the people who heard this testimony was Nancy (Gardner) Viola, who later joined Good News Ministries and became a core team member. Here is her story about how it affected her life, as explained to the congregation of her parish during a stewardship drive in 2003. Go to “Testing God with my finances“.

Please practice sacrificial giving at Good News Ministries. You’ll be making an impact, changing the world by bringing the light of Christ into the darkness of today’s world, renewing the Church person by person by activating the faith of Catholics. Please donate now.

Your article on giving tback to God thru tithing and other means has been a great eyeopner for me. Thank you for that wonderful lesson to me ( imagine being so ignorant about this at age 72 today and having a relatively devout catholic christian since the age of seven due to strict loving and exemplary life of our parents (of twelve children 6 boys & 6 girls) … Dad died in 2004 at 92 years and Mum celebrated her 97th birthday on 8th August 2018 and she is in good shape. Thank you O Lord for all these gifts to me. Teach me to lavsh you with my own gifts of tithe, talents etc for your Church and my fellowmen. Amen . Paul