Anne Catherine: When the executioners found it impossible to drag the woolen garment…over His head, on account of the crown of thorns, they tore off this most painful crown, thus reopening every wound… He shook… As He was unable to stand, they led Him to a large stone and placed Him roughly down upon it, but no sooner was He seated than they aggravated His sufferings by putting the crown of thorns on His head. 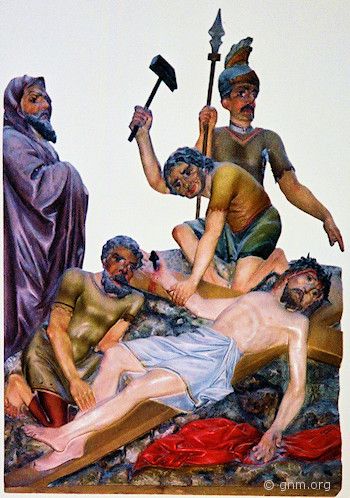 Josefa: The hour has come! The executioners stretch Me upon the Cross. They violently seize and extend My arms that My hands may reach the holes they have prepared in the wood. Every shock causes My thorn-crowned head to come into violent contact with the Cross…the thorns are driven deeper and deeper into it.

St. Alphonsus: After the nailing of one of His hands, the nerves shrink so that they had need of main force and ropes, as was revealed by St. Bridget, to draw the other hand and the feet up to the places where they were to be nailed; and this occasioned so great a tension on the nerves and veins, that they broke assunder with a violent convulsion.

Ah, my Jesus, by what power was it that
Thy hands and Thy feet were nailed to this wood,
but by the love Thou didst bear to men?

Venerable Maria, as she understood the Blessed Mother to say: Then the executioners ordered the Savior to stretch Himself on the Cross in order that they might mark the places where the holes were to be bored for the nails. The Savior obeyed without a murmur, but the wicked men did not make the marks for the holes in the places corresponding with the dimensions of His Body, but wider assunder in order to inflict upon Him a new and unheard-of martyrdom…

The executioners ordered Him a second time to stretch Himself on the Cross in order that they might nail Him to it. The Savior obeyed… Immediately, one of the executioners seized His hand and pressed it down on the hole in the arm of the Cross while another executioner took a big nail with rough edges and with a hammer drove it through the (hard bone of the) Savior’s hand.

Anne Catherine: When the executioners perceived that His left hand did not reach the hole…they…pulled the left hand violently until it reached the place prepared for it. They again knelt on Him, tied down His arms and drove a second nail into His left hand.

Teresa: When His hands have been nailed, Our Savior raises His two feet trembling, for He writhes under the pain.

Anne Catherine: They fastened a rope to His right leg and dragged it violently…and then tied it down as tightly as possible. The agony which Jesus suffered was indescribable… They then fastened His left foot to His right and, having first bored a hole through them with a sort of piercer, they took a very long nail and drove it completely through both feet (which they pressed down to lay flat against the beam).

Josefa: Having nailed My hands, they pull pitilessly at My feet; My wounds burst open afresh…the nerves are severed…the bones dislocated…the torture is unspeakable!

St. Alphsonsus: “Among all the different kinds of death, there was none worse”… But the pains of Jesus were far beyond all other pains; for…the Body of Jesus Christ, being perfectly constituted, was more quick and sensitive to pain — that Body which was fashioned for Him by the Holy Spirit, expressly with a view to His suffering. Tiepoli tells us that, in the Crucifixion, there were dealt 28 strokes of the hammer upon His hands, and 36 upon His feet.

Josefa: See thy Jesus extended on the Cross, without honor or liberty. He cannot stir hand or foot… Nothing remains to Him.

St. Alphonsus: Behold how, on that gibbet of pain, fastened by those cruel nails, He finds no place of rest. Now He leans His weight upon His hands, now upon His feet; but on what part soever He leans, the anguish increases. He turns His afflicted head, now on one side, now on the other: if He lets it fall towards His breast, the hands, by the additional weight, are rent the more; if He lowers it towards His shoulders, the shoulders are pierced with the thorns; if He leans it back upon the Cross, the thorns enter the more deeply into the head…

O my crucified Redeemer,
I adore Thee on this throne of ignominy and pain…
With humility, then, and tenderness
do I draw near to kiss Thy sacred feet, transfixed for love of me…

While Jesus was dying upon the Cross, the men who were around Him never ceased to torment Him with reproaches and insults… And Jesus, while these are outraging Him, what is He doing upon the Cross?… Says St. Thomas: to show forth the immense love which He had for men, the Redeemer asked pardon of God for His very crucifiers…

Ah, my dear Savior, behold me at Thy feet:
I have been one of the most ungrateful of Thy persecutors;
do Thou for me likewise pray Thy Father to pardon me…

Jesus, seeing that He found no one to console Him upon this earth, raised His eyes and His Heart to His Father, craving relief from Him. But the Eternal Father, beholding the Son clad in the garment of a sinner, replied, No, my Son, I cannot give Thee consolation now that Thou art making satisfaction to my justice for all the sins of men.

And it was the will of the loving Redeemer, adds St. Cyprian, to die bereft of every consolation, to give proof to us of His love, and to draw to Himself all our love.

Ah, my Lord, who wert so left in desolation,
be Thou my comfort in my desolations!…

Behold Jesus, at length, actually dying. Behold Him, my soul, how He is in His agony amid the last respirations of His life. Behold those dying eyes, that face so pale, that feebly palpitating heart, that Body already wrapped in the arms of death.

Teresa: His whole Body begins to look bluish, His eyes sink deeper into their sockets, His face and nose pointed and drawn, and the color of His face almost yellowish-grey.

Josefa: Look at My Heart: It cannot contain the ardor with which It longs to impart Itself, and deliver Itself over, and remain always with sinners. How I long for them to open their hearts to Me, to enclose Me in them, and that the fire that consumes Mine should fortify and enkindle theirs…

With enthusiasm, with vehemence It is sacrificed, It is immolated, It is given for those It loves… The Holy Eucharist is love to the extreme of folly.

Please share this with others by using the social sharing icons at the bottom of this page. Or request a printable copy that's licensed for distribution here, unless it is indicated above that it is already available from Catholic Digital Resources.
Printed from: https://wordbytes.org/healing-wounds-of-Jesus-6/