Keep Christ at the center, the Word of Truth in your heart, and the traditional teachings of the Catholic Church as the guardian of your soul.
COVID-19 Faith-building Resources: Podcasts | Marian Consecration | Receive Jesus in a Spiritual Communion | Pray at Our Lady of Miracles Virtual Shrine

The Garden of Pain 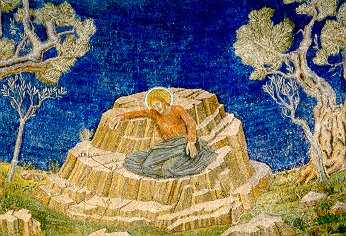 Josefa: The hour had come for the Son of God made man, Redeemer of the human race, to shed His Blood and give His life for the world… I withdrew into the Garden of Gethsemane, that is to say into solitude… It was thus I offered Myself to carry out the redemption of the world…

At the same moment I felt all the torments of My Passion burst overwhelmingly upon Me: …the insults…the scourging and the Crown of Thorns, the thirst…the Cross…thronged before My eyes and pressed upon My Heart, while at one and the same time I saw all the offenses, sins and crimes that were to be committed throughout the ages… I not only witnessed them all, but was invested in them…

And there burst upon Me the wrath of an angry God, and in order to appease His Majesty I offered Myself as security for sinful man…

After having been comforted by an angel sent by My Father, suddenly I saw Judas coming, one of the Twelve, and with him those who were come to take Me prisoner… After he had given Me the traitor’s kiss, Judas left the garden, and realizing the gravity of his crime, gave way to despair. Who can measure My sorrow at the sight of My apostle casting himself into hell!

St. Alphonsus: He saw Himself affronted by his own disciples. One of them betrays and sells Him for thirty pieces. Another denies Him many times, protesting publicly that he knows Him not; and thus attesting that he was ashamed to have known Him in the past. The other disciples, then, at seeing Him taken and bound, all fly and abandon Him.

O my Jesus, thus abandoned, who will ever take up Thy defense?