Warning: This WordByte is not politically correct. But then, neither was Jesus.

Almost every heterosexual person today knows someone who is living the homosexual lifestyle. These are people we care about, and society is telling us that to care we must accept their lifestyle as “right” for them. As Christians, we want to obey Jesus who told us not to judge. As good people, we hear what we believe about love: All love is good, and if homosexuals are in a loving relationship with their same-sex partner, how can we judge it as sinful?

The Catholic Church’s teaching on how we should regard homosexual persons is clearly stated in the Catechism, paragraph #2358:

The number of men and women who have deep-seated homosexual tendencies is not negligible. This inclination, which is objectively disordered, constitutes for most of them a trial. They must be accepted with respect, compassion, and sensitivity. Every sign of unjust discrimination in their regard should be avoided.

In other words, our calling as Christians is to treat them like everyone else: with love and compassion. That paragraph goes on to say:

These persons are called to fulfill God’s will in their lives and, if they are Christians, to unite to the sacrifice of the Lord’s Cross the difficulties they may encounter from their condition.

Politically correct society wants us to ignore their difficulties, even to deny the difficulties as anything but the non-acceptance of homosexuality. But then again, we also live in a world where “sacrifice” is considered a bad thing, as is valuing sacrifices as a union with Christ. So, too, is the idea of celibacy. When 99% of dating relationships on TV and in movies are validated by sex, how can we expect anyone to value celibacy?

This article is intended to put aside the confusions and muddied-waters of the “gay agenda” and messages of worldly society, so that we who are seeking the truth in all humility may regain a clear understanding of what God wants us to believe about this issue, as clearly stated in scripture and Church teachings.

If homosexuals choose to unite themselves to the Lord’s Cross in a spirit of accepting what scripture and Church teachings say about the “disordered” nature of homosexuality, choosing a celibate lifestyle, we should care about their struggles the same way we should care about recovering alcoholics – with support and encouragement as appropriate opportunities arise.

If they do not take this path, we should care about their struggles the same way we would any other sinner – not with condemnation of their personhood but rather with faith-building friendship. It is the Holy Spirit’s job to change their minds about sinful activities, not ours. If sinners know where we stand on the issue, we do not need to say more about it. The rest of our time with them should be the kind of friendship that leads them closer and closer to Christ.

If you are someone who feels condemned, read the WordByte Who Condemns You? Not God! (Discover Your Sainthood).

What does Scripture say? 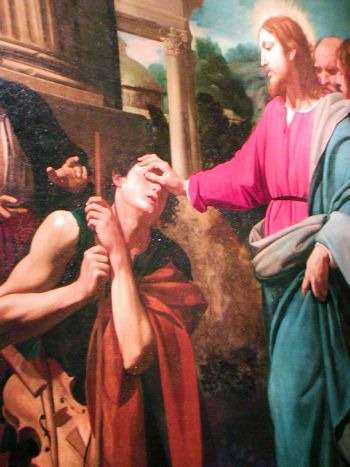 Saint Paul spoke of this in 1 Corinthians 6:2. He wrote: “Do you not know that the holy ones [i.e., us who have been redeemed by Christ] will judge the world?” He said this in the same paragraph where he’s telling Christians not to take each other to court, because love for one another will enable us to settle matters on our own.

Then he goes on to say that it is better – more loving, more Christ-like – to put up with injustices instead of suing each other. Remember, he’s talking about how Christians should deal with other Christians. Then immediately he tells those who inflict the injustices that they are sinning. (He is making a judgment and teaching others to do so!) And then he names some of the sins that the Corinthians were committing – judging as immoral, among other sins, sexual behaviors that, to summarize them, are all outside of marriage.

Put that into context with the rest of the scriptures and he might as well have mentioned homosexual behavior, because there is no valid marriage when it is not the union of one man and one woman. Elsewhere in scripture, Paul (see for example Ephesians 5), as well as Jesus Christ (see for example Matthew 19), taught that a husband and wife — a man and a woman — become one in marriage, based upon God’s design in Genesis chapters 1 and 2.

Can a loving relationship ever by wrong?

But what if the sexual activity is between homosexuals who truly love one another? How can love be wrong under any circumstance?

The same question applies to two adults of opposite genders who can marry but choose not to, yet live as if married.

Let’s dig deeper. Love is God. God is love. If one loves, one has God in their hearts even when they don’t believe in God.

What that means, though, is not freedom to commit sin in the name of love. The paragraph from the Catechism that I quoted above should be read in context with what comes before and after it:

(Paragraph #2357) Homosexuality refers to relations between men or between women who experience an exclusive or predominant sexual attraction toward persons of the same sex. It has taken a great variety of forms through the centuries and in different cultures. Its psychological genesis remains largely unexplained. Basing itself on Sacred Scripture, which presents homosexual acts as acts of grave depravity (see Genesis 191-29; Romans 124-27; 1 Corinthians 6:10; 1 Timothy 1:10), tradition has always declared that “homosexual acts are intrinsically disordered.” They are contrary to the natural law. They close the sexual act to the gift of life. They do not proceed from a genuine affective and sexual complementarity. Under no circumstances can they be approved.

(Paragraph #2359) Homosexual persons are called to chastity. By the virtues of self-mastery that teach them inner freedom, at times by the support of disinterested friendship, by prayer and sacramental grace, they can and should gradually and resolutely approach Christian perfection.

We need to remember that love in its purest, most sacred form is the goal we all have a duty to aspire to. This means that we are to love homosexuals as the beloved children of God that they are, with all the dignity that comes with being a child of God. And homosexuals are to be invited to – when they are properly prepared by the Holy Spirit and by our actions of love toward them – to love God and his ways with all their hearts, which means they are called to accept the truth about homosexual activity as sinful, which to some extent separates them from the fullness of God’s love.

Until they are ready for the truth, we are to treat them as we should anyone who is in sin but is not ready to accept the truth: with patience, good example, and compassion, for they truly do not understand that they harm themselves, each other, and their relationship with Jesus.

And now let’s dig even deeper. Who did Jesus get angry at? Not the sinful woman at the well who had many husbands and was living with a man she did not marry. Even before she repented, he was compassionate toward her. Same with the woman caught in adultery who was about to be stoned to death. He protected her>and told her to go and sin no more. All with compassion.

Jesus did get angry, though: at those who led others to sin. He said that those who lead little children to sin would be better off cast into the sea with a millstone around their necks to drown them. Did he feel any differently about someone who leads adults to sin? Of course not! St. Paul even excommunicated someone like that in 1 Corinthians 5:1-8.

There are many and varied reasons why people today think they are supposed to live in active homosexual lifestyles. There has been so much effort to convince all of us that sex outside of marriage is not sinful, and this has been so aggressively extended to include homosexual activity that we who stand up for God’s ways are being pressured to think of ourselves as sinning (intolerant, judgmental, etc.). And this same effort has caused researchers, psychologists, sociologists, etc. to be stopped from even considering whether there might be any causes for homosexuality that could have a cure or prevention or path to normal, healthy heterosexual relationships.

Who did Jesus get angry at? The Pharisees who taught others to be like them. The Pharisees who were not interested in hearing the truth that called them to change – i.e., they were unteachable. The terrible thing about the homosexual culture we are all being asked to tolerate and even approve of is that it has produced a lot of unteachable people.

Love is the bottom line and the highest goal

I will end this article circling back to my earlier point: We are to love the homosexuals we know personally, loving them unconditionally and compassionately. We are to avoid judging their hearts, because only God knows how accountable they are for their sexual sins and he does embrace them in their love for one another. We are to invite them to grow closer to Christ – especially by our example of unconditional love. We are to make clear that we believe that homosexual activity is not what our society professes it to be and that there is a higher, purer love they (and we) are called to, but once they know this is our stand on the issue, we are not to repeatedly cast this pearl like a stone at them. Rather, we are to show them what the higher, purer love is like. We are to help them journey closer to Christ and let him change their hearts — if they are teachable, and we can help them be teachable by the way we invite them to grow closer to Christ.