The Meaning of Symbols
in the Book of Revelation

To read the Word of God in this apocalyptic book without letting our imagination give us misguided interpretations, we need to understand the symbolism the same way the first readers did. These symbols were easily recognized by the first readers, because the meanings had been familiar to the people throughout Jewish history, as can be seen frequently in the Old Testament.

666 = tripled (the most) imperfection; anyone who viciously persecutes Christians

7000 PEOPLE = a large number of people from all social classes

144,000 (the square of the 12 tribes of Israel multiplied by a thousand or a large amount) = the new Israel, embracing all Christians from every nation and tongue; NOTE: in the list of tribes (7:5-8), Dan is omitted because of a belief that the antichrist would arise from it

ABYSS = the netherworld, where all the demons are kept for many, many years before being cast into the pool of fire

ANGEL = leader of the Christian community

APOLLYON = Greek name for the Destroyer

BABYLON = Rome (where persecution was coming from)

BEAST = the forces of evil; the antichrist

BEASTS OF THE WAR IN HEAVEN (12:7-9) = 1. Roman empire, worshiped by all the world; 2. the antichrist, who leads people to worship first beast

BOOK OF LIFE = where the names of the redeemed are kept

BRIDE = the Church in covenant relationship with Christ

DIADEMS = sovereignty over the kingdoms of the world

EAST = source of light, the place of paradise

EYES (CREATURES COVERED WITH) = the all-seeing, all-knowing power of God

EYES LIKE FIERY FLAME = able to see all and know all

FACE THAT SHINES LIKE THE SUN = the divine majesty of Christ

FIRE MINGLED WITH SEA OF GLASS = sanctity in facing God

GOG AND MAGOG = all pagan nations

HILLS (SEVEN) = all the territory covered by Roman empire

HORSES AND THEIR RIDERS

HUMAN BEING = wisest of God’s creations

INHABITANTS OF THE EARTH = pagans

JEZEBEL = someone who brings pagan customs into Christianity

LION OF THE TRIBE OF JUDAH = the victorious Jesus

MEASURING THE TEMPLE = God preserves those who remain faithful to Christ

MOUNT ZION = the gathering of Israelite believers during Christ’s reign

NETHERWORLD = the abode of the dead

NEW NAME = being reborn in Christ

OPEN DOOR = evangelization efforts; Christ Himself, who is the door into the house of God

PILLAR = help in rebuilding the temple of God in new Jerusalem

RULER OF THE KINGS OF THE EARTH = Jesus

SEA THAT, AT THE END, IS NO MORE = Satan’s home

SEALED WITH SEVEN SEALS = totally hidden to all but God

SEAL OF THE LIVING GOD = under God’s protection & ownership

SOUND OF RUSHING WATERS = Jesus is speaking with divine authority

SPIRITS = angels (7 spirits = all the angels)

SWORD COMING FROM HIS MOUTH = the Word of God, the only weapon needed to defeat the enemy

1. SOUR IN THE STOMACH = sufferings of God’s people

TRUMPET BLAST = calling together the believers

TRUMPET-LIKE VOICE = the voice of Jesus

VIRGINS = people who never indulged in any idolatrous practices

WINGS = freedom of movement that angels have

See also: The Book of Revelation: Understanding Its Message of Encouragement

A Small Group or Whole Parish License can be ordered from Catholic Digital Resources. 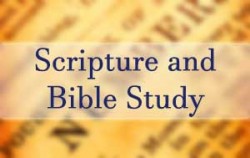